Wood consists of sapwood and heartwood. Sapwood is the outermost layer of the tree, just under the bark. It forms the living part of the trunk and serves to conduct water and store nutrients. Heartwood is the inner wood of the tree. Sapwood gradually transforms into heartwood as the tree continues to grow. The boundary between sapwood and heartwood varies between different species but in oak it is generally between the 10th and 40th year.

To obtain an accurate, uninterrupted series of measurements of the ring widths, a magnifying glass with an integrated scale can be used to measure panel edges which must be clean (perhaps shaved) for optimal reading of the rings. This on-site method has evolved with developments in digital macro-photography (Daly and Streeton 2017). In some cases, measurements can be taken from X-rays (Klein, 1998) or CT scans (Daly and Streeton 2017) but growth rings can also be recorded with FIMO molding clay to create a negative image of the ring sequences. In most cases, ring sequences are measured using computer-based measuring systems (e.g., Tyers, 2010).

Crossdating in its simplest form is the comparison of two tree-ring sequences. The purpose of crossdating is to discover in which position the two sequences match: the placement in time of one ring series relative to the other. If one of the curves is attributed to a particular period of time, the positioning of the second curve with significant correlation leads to absolute dating. In order to accept a dating position for a tree-ring curve, a crossmatch must appear with many independent tree-ring datasets at that same position, achieving very high statistical correlation and it should always be examined through visual comparison. Master chronologies for each type of wood must therefore be established for different regions (Wadum et al. 2019).

Interpretation of a dating and calculation of felling year

A dendrochronological study will provide information about the years during which the preserved growth rings in the studied wooden object were formed, thereby determining when the tree was felled. The possibility of obtaining a precise date for the tree felling (annual or sometimes even intra-annual date) depends on whether the bark, bark edge (sometimes referred to as waney edge), or sapwood is preserved (Fig. 1). If the bark has been preserved, or the bark edge (the natural curve of the wood surface, even when the bark is missing), an exact year for the felling of the tree can be determined. By observing whether the last ring under the bark is fully formed or not, one can also determine whether the timber was harvested during the dormant (autumn/winter) or the growth (spring/summer) season.

Fig. 1. The figure shows a schematic cross section of an oak tree with pith (P) in the centre, thereafter heartwood (HW), sapwood (SW), waney (W), and bark (B). The oldest rings are located closest to the pith, whereas the most recently formed ring is located just beneath the wane and bark. A line drawing indicates the parts of the trunk that may be used for an oak panel. According to guild regulations the relatively soft sapwood is most often removed from the panels before they are joined together. It is therefore often difficult to obtain an exact felling year for the oak trees used in panel paintings.

The sapwood is located just beneath the bark of the tree and includes the last-formed growth rings. If the bark or bark edge is missing and only parts of the sapwood has been preserved, the approximate felling date can be calculated with high accuracy since the approximate number of missing growth rings in the sapwood can be estimated (Fig. 2). To estimate the number of sapwood rings, statistics based on numerous empirical studies can be used (e.g. Wazny 1990; Hillam and Tyers 1995; Sohar et al 2012). Such studies in Northern Europe have found an east-west gradient in the average number of sapwood rings in oaks. For example, in Ireland or England, oak trees contain approximately 30 sapwood rings, whereas the number of sapwood rings tends to decrease as one moves further eastwards. However, it is a little more complicated as oak trees that contain many growth rings (relatively old or slow growing trees) tend to have more growth rings in the sapwood compared to fast growing or young trees. In summary, the estimates of the amount of missing sapwood rings in oak trees are most often based on which geographical region the tree is believed to originate from (see section about provenance) as well as the age of the tree when it was felled. Should the sapwood be completely missing, one can only determine the earliest possible felling date, sometimes referred to as a terminus post quem (TPQ). 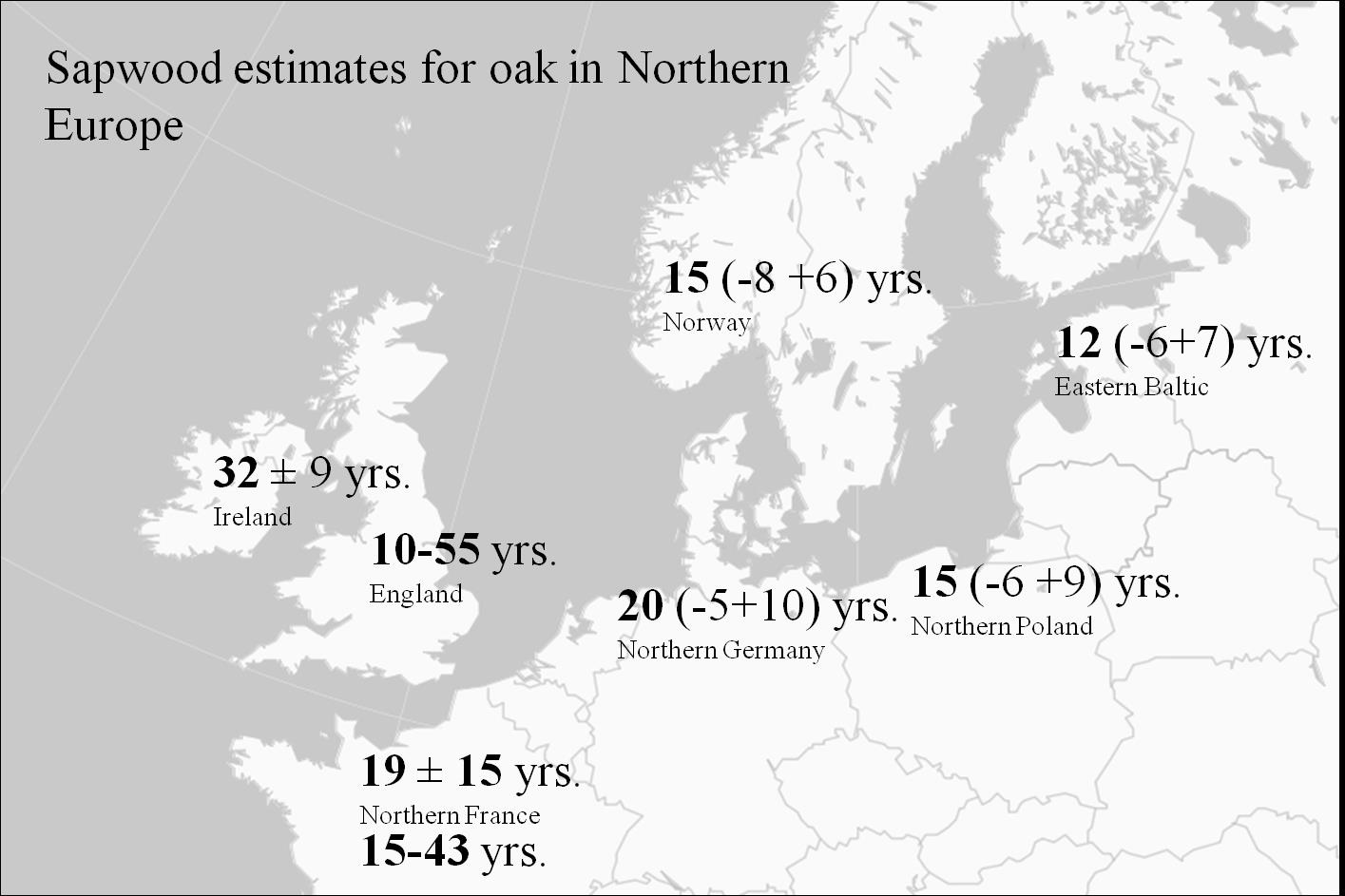